A long time back, hidden away in a much larger post, I indicated that I wanted to port the FTE text editor to build against the Watcom toolchain so that it ran under DOS/4GW instead of CWSDPMI which the current (old) DOS build built with DJGPP uses. The reasons for this are that FTE includes menu options for running external tools (such as compilers, debuggers, etc) but because it runs under CWSDPMI, if you try to run most things that use DOS/4GW, they will crash. Different DOS extenders shouldn't be mixed.

I finally did this today. Hooray! Well, I'm probably the only person out there who cares about this, but still, hooray! 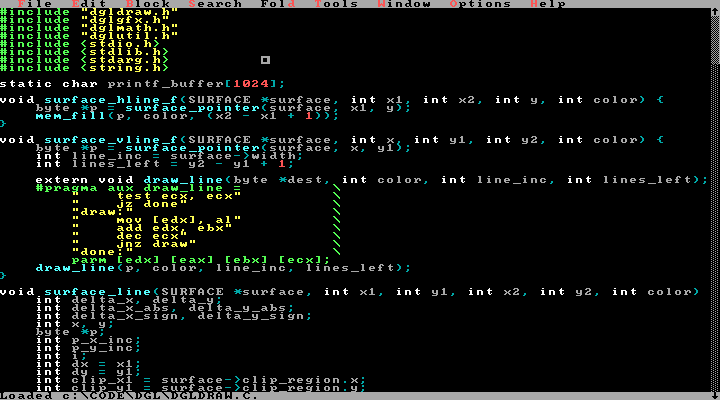 I've uploaded the changes to a Github project which includes a binary release for anyone else who may be interested in such a thing.

In addition to being build with the Watcom toolchain, I also took the opportunity to fix the broken / un-implemented DOS support for different sized screen text modes, such as 80x50 which I consider mandatory for a text editor under DOS these days. The non-platform-specific bits of code was already set up to work with a variety of different screen sizes. However, the DOS-specific bits that existed in the project (which was intended for DJGPP) did not include support for different DOS text modes via interrupt 10h. A rather curious omission since there was a non-trivial amount of other DOS VGA work that had to be done in the code to get it running under DOS in the first place by whoever did the DJGPP port way back when. Perhaps that person only used 80x25 and decided to just leave it at that. I suppose I'll never know. Meh.