Been a while since I wrote about this. When it comes to my own personal coding projects, rest assured that I take it very slowly. Heh.

I released the code that I've been working on for the past month. It's a DJGPP library called libDGL. DGL stands for "DOS Gamedev Library." Yes, I am incredibly unoriginal when it comes to naming things. This is a library aimed at "retro game development" with MS-DOS, targeting VGA Mode 13h using C.

As is mentioned on the Github project page linked above (and as I've mentioned previously here as well), I am using an older version of DJGPP from the late 90's. More specifically, I am using:

I make no guarantees that this code will work with different versions. I'll probably test it at some point, but for now I am more interested in fixing bugs and adding more features. My "todo" list for this library is quite long still. Even so, I do feel like I've got a fair bit accomplished so far.

To help me test out a bunch of this, I wrote a very simple Asteroids game over the past two days. Asteroids is a very simple game, and I feel like two days was a long time to take to write it, but in the process I uncovered and fixed a number of bugs in libDGL, so I guess I should not feel like I was too slow. Finding and fixing bugs was the WHOLE point of writing it after all. 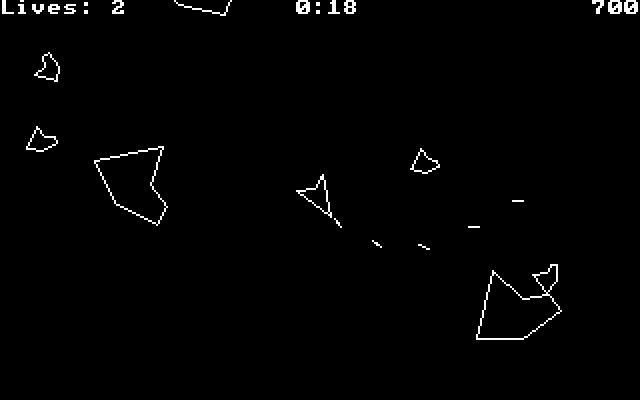 The code is available here.

As you can imagine based on the above screenshot and the game being Asteroids, it's nothing particularly special, heh. In fact, this has not been tweaked to provide any real level of difficulty to the player at all. I was more interested in testing out libDGL then in balancing a game and providing a full layer of polish. As well, I am less than happy with how the code that handles the different game states turned out. It's fairly sloppy honestly, heh.

This game doesn't make use of any sprite blitting. Instead, it uses line drawing and 2D vector transformations for the graphics. This was useful to test out and verify the math functions I had written, and is the main reason I picked Asteroids.

Not really much to say about it honestly. The next test game I'd like to do is probably some kind of simple vertical 'shmup type of game using sprites for graphics. Probably something along the lines of what I was originally going to do on the Amiga 500 some months ago.

So, where am I going with all of this anyway? Well, I don't have any specific plan worked out, but in the back of my head I've got some grandiose ideas about writing some 2D dungeon crawler type game (something I wanted to do as a kid back in the 90's but never finished... actually, that might be a fun post to write in the future, revisiting some of that code from back then which I have sitting here now). As well, I'd like to eventually work my way up to some 3D raycasting games, with a final goal being something Doom-like but with some RPG elements thrown in (and not gritty/dark like Doom is). But this is all quite a long ways off, and first thing's first... gotta work on the foundation.