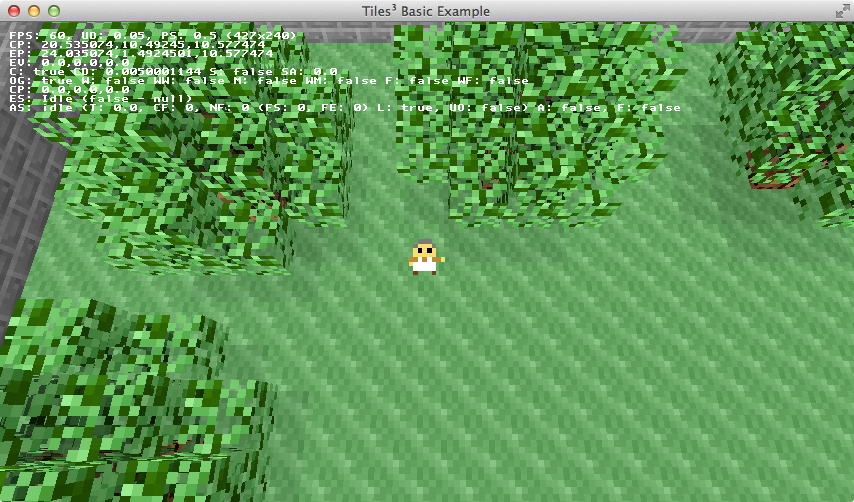 It's been a while since I've released some game code, so today I'm going to start small and release a really basic example application. This is probably not that exciting really, but it showcases a very, very basic entity system implementation built upon libGDX and my own libraries gdx-toolbox (which includes the base entity and event system used in this example app) and gdx-tilemap3d.

You can find the Git repository here.

I've basically copied a subset of the entity system implementation in use in my other game project, stripping out a bunch of extra stuff that isn't totally necessary for a simple example demo (such as the combat system, particles, NPC handling and more).

I'm calling this basic entity system implementation on top of gdx-toolbox and gdx-tilemap3d the "Tiles³ Framework" just because I feel I need some kind of name for it ("my game framework" just doesn't sound that great). Though the use of the word "framework" should not be confused as meaning something totally generic that can be used for a lot of different things with no or minimal changes. That is not the goal with this! Rather I expect that each project using this code will need to customize it quite a bit to suit the particular needs of that application. This is really just a template to get started with.

I'd like to build on this over the next couple weeks and put up another example application that showcases a really simple game. Nothing even remotely fancy, but something that will be more interesting then a walk-around demo.

Following that, I'd like to finally get started on the map editor I wrote about briefly in a post over a year ago and still haven't begun yet. I've written a couple unfinished toy projects using this code over the last year and each time I have to design a new map it's the most tedious thing ever, so such an editor would be extremely helpful to me at least!