UPDATE: I posted a follow-up here where I go into to more details about this PC which may be of some interest to you.

A couple weeks ago or so, I came across a forum post with someone showing off a mini 486 PC by Unisys. After a bit of searching, I discovered that there was a seller on eBay who had a bunch of these for sale so I would easily be able to get one. When I saw this, I instantly thought to myself "I must get one of those!"
EDIT: It seems a video someone posted about these got a bunch of people buying them from this eBay auction which in turn caused the seller to bump up the price considerably. I only paid $97 CAN for mine!

However, I decided to sleep on it and wait a few days first and see if afterwards I still wanted it. I had originally decided that I did probably want to either buy or build a 486 PC at some point -- actually scratch that. While I had initially thought it would be cool to go as far back as a 486, when I thought about it some more I realized that getting at least a Pentium would probably make more sense. This was because in addition to wanting to use it for some "old school" development purposes, I'd also definitely want to use it to play games. And a 486 wouldn't cut it for that use for me personally. And with this thought in my mind, the question of what exact hardware specs I should go for was left unanswered and I realized that I had to do more thinking on it all. And regardless, I wasn't in any rush as I was still having fun fiddling with Amiga-related things.

Well, after a couple days passed by I still found myself thinking about it quite a lot. Space is at a bit of a premium for me as lately I keep buying random electronics toys that I don't really need. But what other small 486 PCs am I likely to find or be able to build myself anyway? Plus it wasn't that expensive (well, shipping to Toronto cost more than the PC itself, but even so, I can afford it ... meh). So I bought one!

It arrived pretty quick (4 days). And my god, it is small! 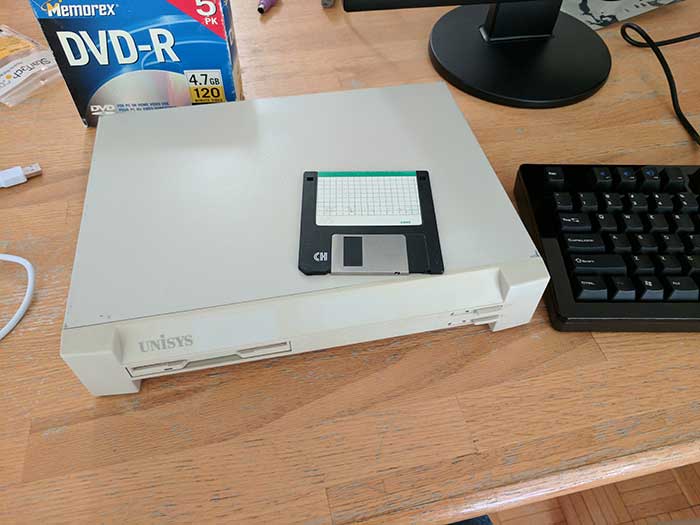 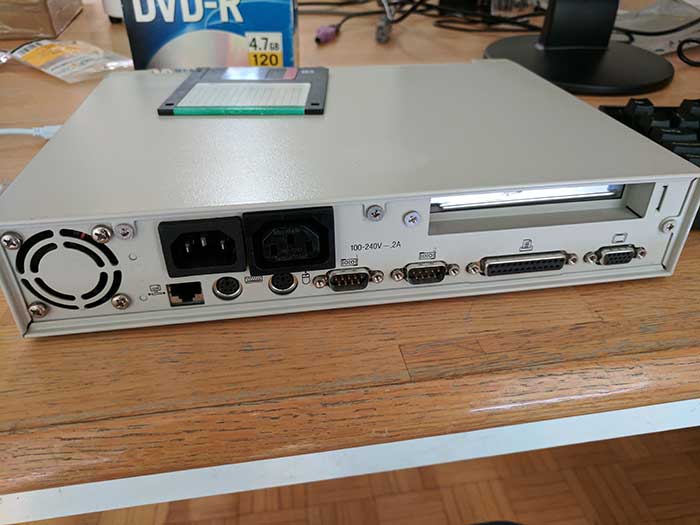 There's little information out there about these that I was able to find, just a few web pages with spec lists and some French videos on Youtube from some guy doing both an overview and a tear-down. Evidently, the exact hardware that these come with can vary a bit, but mine was: 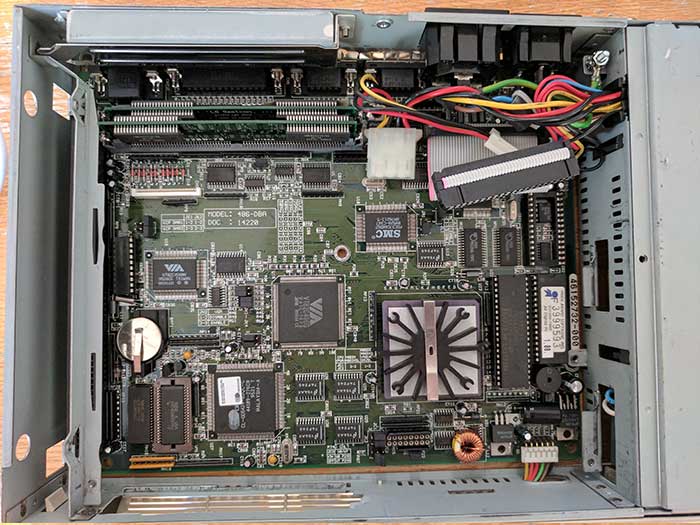 In the above picture, the floppy drive, hard disk, and ISA riser have all been removed of course. But with them all in there it's packed in pretty tight! I was a little bit concerned about what the temperature might be like when it's been running for a while, especially since the only fan in the whole computer is a small one for the PSU only.

Honestly, I'm quite happy with these specs! I knew it was possible that these could come with anything from a 486DX2 33MHz to a 486DX4 100MHz, and I was hoping for at least a DX2 66MHz since it's what's largely regarded as a minimum spec necessary for playing games like Doom at a decent speed (you can do it with less of course, but then it all depends on your tolerance for lower framerates). 16MB of RAM is plenty and for a 486, you won't need any more at all. I was a little bit unfamiliar with the graphics cards of this era since I was younger at the time and had no money anyway, so I just used whatever was available to me (heh), but a GD5424 with 1MB VRAM is not too shabby either. Not amazing, just average really. Onboard LAN is quite nice, means I don't have to use floppy disks to transfer stuff to it since it's obviously lacking a CD-ROM drive.

Aside from the lack of a CD-ROM drive, the other big thing that is missing is sound. With no onboard sound capabilities aside from the lovely PC speaker and with a single ISA port available, getting a Sound Blaster card seemed like the obvious next step.

Of course, since this is such a small computer, one needs to take into account whether any given expansion card will actually fit into the case. Most of the better Sound Blaster card options are unfortunately too long.

I eventually settled on two possible options: a Sound Blaster AWE64 or a Sound Blaster Vibra 16XV. The few people I could find that had these computers all seemed to go with the AWE64 (something like a CT4520 is small enough to fit). I ended up going with a Vibra 16XV CT4170 mainly because I found one locally for cheaper, but would've gone for an AWE64 otherwise myself.

The only other thing of note was that within a few days of having this computer, the Fujitsu hard disk it came with died. I didn't intend to use that disk over the long term and had already ordered a CF-to-IDE adapter to replace it with. However, since the adapter hasn't arrived yet, I ended up replacing the drive temporarily with an 8.4GB Maxtor drive I still had sitting around. The BIOS only recognizes 2GB and is only able to boot from a partition that is 504MB (max) however.

For the first several days I was using an old SyncMaster 943N 19" 4:3 LCD monitor but grew tired of the poor upscaling of low MS-DOS resolutions. Picked up a cheap CRT monitor (a 15" Sony Trinitron CPD-100SX) from someone on Kijiji and now I really feel like it's all come together as a real old-school DOS PC! 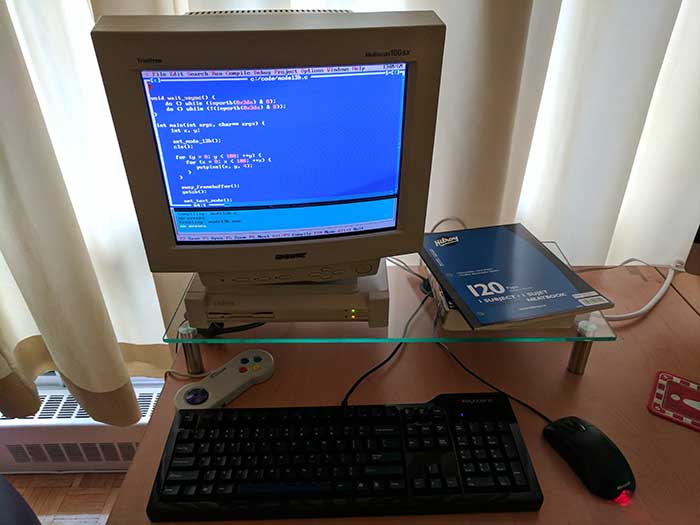 In the above picture, the text editor on-screen is RHIDE for use with DJGPP. I was fiddling with some VGA Mode 13h C code... a nice trip down memory lane.

Overall, I'm glad I got it. It runs great, it's quiet, for a 486 it's decently specced and runs pretty much any games I throw at it from up until about 1996 or so (then you start getting into games really intended for Pentiums). Even Duke Nukem 3D is playable at 320x200, though barely. I actually think that the CF-to-IDE hard disk would help here as I do notice the game does load stuff from disk during game play here and there, and it seems like those disk accesses usually correspond with a slow down.

After the computer has been running for a while, the PSU does heat up quite a bit and the case does get warm to touch on that side. It still does concern me a little and I might investigate to see if I can get a better fan. Also, I would hope that once I remove the "big" hard disk and replace it with a much smaller CF card that it might help improve airflow inside the case and possibly reduce the internal temperature a little bit. However, from what I can tell from the few other forum posts that I've found from others who own this computer, heat doesn't seem to be a problem. So, fingers crossed that it remains that way as I'm not sure what else I could do (nowhere inside the case that I could install an additional fan or anything like that).