A number of nice upgrades arrived over the past week or so.

The most significant honestly is the Amiga RGB cable. I'm no stranger to using RGB video for game consoles, but having been stuck with only Composite video on my Amiga 500 for the first two weeks that I had it, and then suddenly switching to RGB reminded me of what a huge difference in quality that switch is. Awesome.

Next up is an accelerator I bought, the ACA500plus: 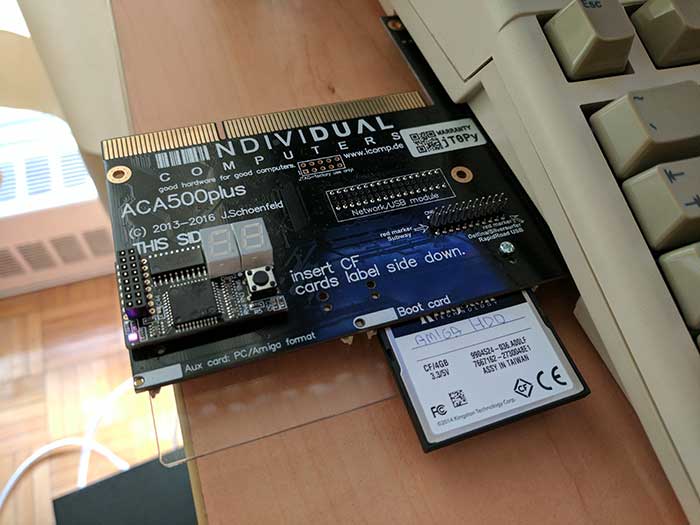 This is honestly quite overkill for what I really want out of it, but it's probably nice to have all of it's features available anyway.

Getting something like an A590 would probably cost at least as much as the ACA500plus, and wouldn't offer any of it's other features. The Amiga 500 doesn't really have any other hardware options for adding hard disk-like storage (as it doesn't have any kind of IDE controller built in).

The ability to have a full 8MB of RAM is also nice as an option, especially so once I get into using C compilers. And the CPU overclocking ability (14MHz guaranteed stable, higher without the guarantees) is nice too, though I will probably keep at it the base 7MHz, as my goal has always been to work on projects that are targeted for the Amiga 500 specifically.

I have mixed feelings about the extra RAM being enabled or not. One thing I hadn't realized about Amigas (at least in Workbench 1.3, not sure if this changed with newer versions) is that when you have large partitions mounted, the system ends up using larger amounts of RAM (probably for some caching purposes? not sure exactly). So if I'm using the hard disk ability of the ACA500plus, leaving the extra RAM also enabled is a very good idea else the base 1MB (with 512KB trapdoor expansion) gets used up super fast. However, I need to make sure I don't get lazy with memory usage in my projects and make them incompatible with the baseline spec.

Final upgrade that was a nice change was a new power supply for both an Amiga 500 and Commodore 64, custom made by Ray Carlsen: 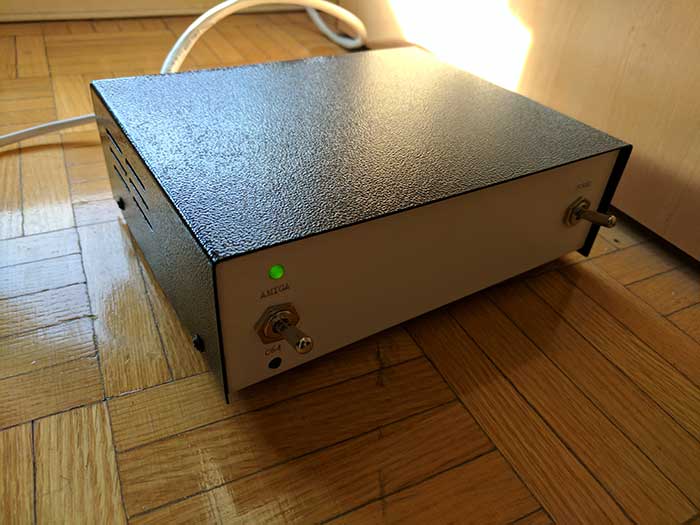 Since the Amiga 500 I got is from the UK, it came with a European power supply which of course is 220V which means I was forced to use a step up voltage transformer in conjunction with it. This was kind of annoying, and both the original Amiga power supply and the step up transformer ran a bit hot which I wasn't a big fan of. This new power supply runs on 120V of course and runs quite a bit cooler. Plus it physically takes up less space (one unit versus two).

Other then that, I've been toying about with AMOS here and there. It's been fun, and a real blast to the past for me which I'm enjoying so far. Not much to say other then that yet really, as I've just been continuing to work through the user guide for an hour or two each night, as well as consulting some other books I've picked up as I go along while learning the ins-and-outs of the hardware. Once I finish up going through the user guide (which is fairly thick, almost 400 pages), I'm thinking I may start with a vertical scrolling 'shmup type of game just to get my feet wet. It'll probably take awhile to get going as it'll obviously be my first AMOS project. Overall though I'm finding AMOS easy to get into. I think what will be difficult at first is optimizing for the limited hardware. And that's the challenge I was after in the first place.