It's been a long time since I've written anything about Amiga stuff. Truthfully, that is because the Amiga 500 that I picked up three years ago has been sitting in a closet for the majority of that time, unused.

That felt very sad to write, but there were a few reasons why that ended up happening.

First and foremost was that I started getting back into DOS computer stuff shortly after picking up the Amiga. I originally picked up the Amiga as a curiosity. I never had one back in the day. I was a few years too young really, and more than that, the Amiga wasn't as big a deal here in North America as it was in Europe. The first computer my family owned was a PC. When I bought an Amiga off eBay a few years ago it was just to fiddle around with. I'd read about them over the years and was curious since they had a bunch of interesting hardware and software to toy around with. But I had absolutely no nostalgia for Amigas. However, I had a ton of nostalgia for DOS-based PCs, so when I started poking around with them, that really sucked up all my focus.

The second reason for packing away the Amiga 500 that I had bought was that my space at home was limited, and the Amiga 500, plus the monitor I needed to use it, plus the ACA500+ expansion that I had mainly to use flash-based storage media (I didn't really want to just use floppies) was all just a bit too bulky for my set up at that time.

There are different models of Amiga to choose from, some harder to get than others, and I originally decided to go with an Amiga 500 because it was a fairly common recommendation. However, over the past few years I've come to realize that most of the usual reasons for those recommendations that I had read at that time didn't really apply so well to me.

The most common reason for going with an Amiga 500 is for compatibility with games (due to Workbench 1.x being the out-of-the-box configuration for an Amiga 500). However, I'm not terribly interested in using an Amiga to play existing games. This is mainly because I have no nostalgia for these systems. I find it fun to load up a game on them once in a while, but it is rare and I could probably count the number of games I've played on an Amiga on one hand (maybe two...).

A survey of other Amiga models over the past few months led me to the Amiga 600. As I understand it, at the time it was released, it was seen as a disappointment. There are a variety of reasons for this, but one that I find interesting is how potential buyers at that time (in 1992) were not so interested in the addition of the 44-pin IDE interface (for use with an optional 2.5" hard drive) or the replacement of the Amiga 500's Zorro expansion slot at the side with a PCMCIA expansion slot on the Amiga 600. In 1992, hard drives were expensive. Especially 2.5" hard drives. The PCMCIA standard was practically brand new at that time, so PCMCIA expansion cards were similarly expensive. And of course, the switch from the Zorro expansion bus to PCMCIA meant that any existing expansions someone might have had could not be used with an Amiga 600. So, in 1992, Commodore's choices were somewhat perplexing. In 2020, their choices enable easy expansion, as there is a plethora of compatible and cheap storage solutions for both the 44-pin IDE interface and PCMCIA expansion slot.

All of this, and especially the fact that the Amiga 600 has a more compact form-factor than the Amiga 500 does, led me to pick one up on eBay.

One big problem with an Amiga 600 (and 1200) is that they use a lot of surface-mounted components on the motherboard, including capacitors. These capacitors are prone to leaking and ruining the motherboard in the process. I'm still very much an amateur at soldering, and given how many of the problematic capacitors on the Amiga 600's motherboard are located in tight spots around other components, I figured it best to try to get one that had already been serviced by someone more experienced than me.

At the same time, I picked up a bunch of upgrades which I knew I would want:

Noteably absent from this list is some kind of "accelerator." For an Amiga 600, the usual choices are either the Furia or Vampire accelerators. I may one day pick up a Furia (because the Vampire accelerators are hard to get a hold of apparently), but I feel like I am just fine with the performance of the stock 68000 7MHz CPU for now. 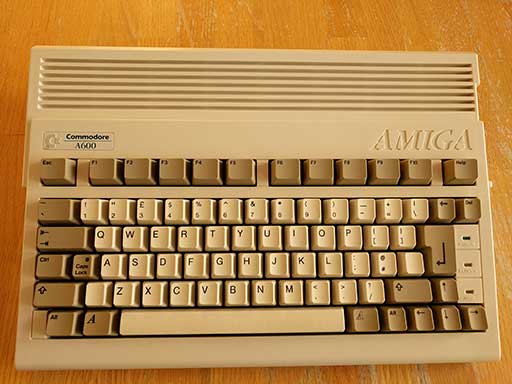 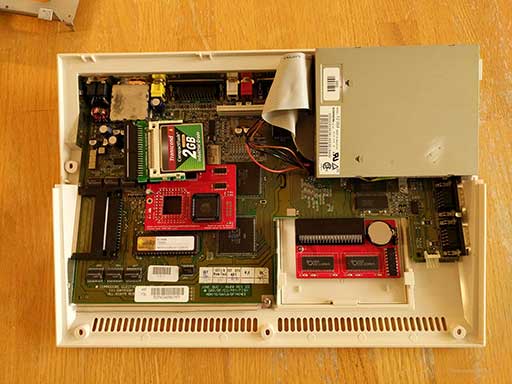 Note the red expansion board that appears to be laid flat over top of the motherboard. That's the 4MB Fast RAM expansion. Because the Amiga 600 uses all surface mount components that have been soldered directly onto the motherboard (with the sole exception of the Kickstart ROM chip, which is socketed, and thus easily replaced), CPU and/or RAM expansions like this need to be designed to fit over top of the 68000 CPU on the motherboard, and essentially hijack the pins on it to override it or extend it (as in this case, adding 4MB of memory). This does unfortunately make expansions like this somewhat flimsy. It's very easy to ever-so-slightly nudge the expansion board such that not all the pins are connected.

Recently, I re-jigged my desk at home and mounted my two 27" LCD monitors with a dual monitor arm thingie so that I could reclaim some additional desk space previously used by the monitor stands. This was a loooooong time coming. No idea why I didn't do this sooner. But this space savings meant I could shuffle some other things around on my desk and that meant I was able to finally work in a permanent spot for an Amiga (for now, or could use it for something else in the future). 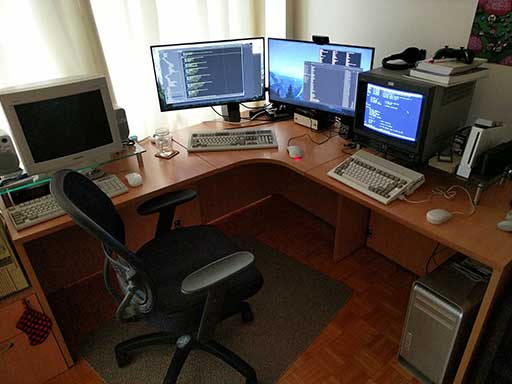 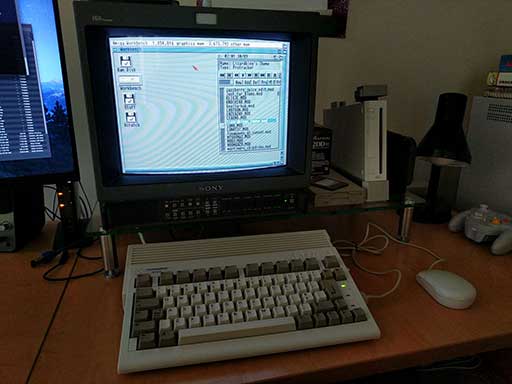 Yeah, it's a bit cozy on my desk now I guess. Some might call it cramped I suppose, heh. But I kinda like it. When you have limited space, you work with what you have. The Sony PVM 14M4U monitor that I am using with the Amiga 600 is a good fit for it due to it's RGB video support and also the fact that it supports both PAL and NTSC (the Amiga 600 I got is a PAL model originally from the UK).

You can kind of see in these photos that the more compact form-factor of the Amiga 600 works better with my desk. The Amiga 500 does fit, even with the ACA500+ attached, but it is quite a bit wider and is annoying to use with the space I have available here when you factor in that I need to also have additional space on the right to comfortably use a mouse too.

I've had the Amiga 600 itself all set up and working for a few weeks now here, but the other upgrades I listed above didn't arrive until a few days ago. So up until then I was using floppy disks, using my Amiga 500 to prepare the disks first. Kind of a roundabout way to get software onto it in the interim. Thankfully I had the spare external floppy drive, as being limited to just a single floppy drive with no hard disk is really quite an experience. Now I feel very spoiled with the Compact Flash storage addons, heh.

So what will I be doing with this now? The original reason I wanted to explore an Amiga several years ago still exists for me. I feel like it is a very interesting hardware target for coding on/for. All these neat custom chips that you can work with directly. I've been teaching myself 68k assembly slowly, from both books as well as a great Youtube series. Might also play with Blitz Basic some more too. I'm not sure exactly to be honest, since I'm still exploring the hardware and getting a feel for it's capabilities. It's definitely much more different than the DOS coding I've been doing, as you don't have that many CPU cycles to spare and even though you've got all these neat custom chips for graphics and sound, you still need to be very performance-minded.

I don't expect to be sharing much of anything Amiga related for a long while yet since I'm still doing a lot of learning with it. As well, since I'm still working on my existing DOS coding projects too. But maybe I'll be able to find something Amiga-related to write about in the not-too-distant future.