I figured that I would post a follow-up regarding the Unisys CWD 4001 mini 486 PC I picked up earlier this year. I've had a few people now ask me various questions about it. It is certainly an interesting PC, especially for those looking for a nice compact retro PC to play around with so I certainly don't mind posting some more information about it to help out anyone else with questions regarding it.

Almost six months later and I'm actually not using mine that much, as I ended up building another 486 PC in a baby AT case. This was mainly because I wanted to be able to toy around with different hardware customizations, have more options for sound cards and have internal CD-ROM and 5.25" floppy drives. Otherwise my CWD 4001 is still working perfectly fine.

As mentioned in my previous post earlier this year, the hard drive it originally came with died so I replaced it with a CF-to-IDE adapter. I got a StarTech IDE2CF and a Transcend CF200I 512 MB Compact Flash card. I had to cover the bottom of the adapter with electrical tape as otherwise some of the pins on the bottom would short against the metal part of the case it is resting on (and I could not find any kind of mounting bracket to fit in there instead). 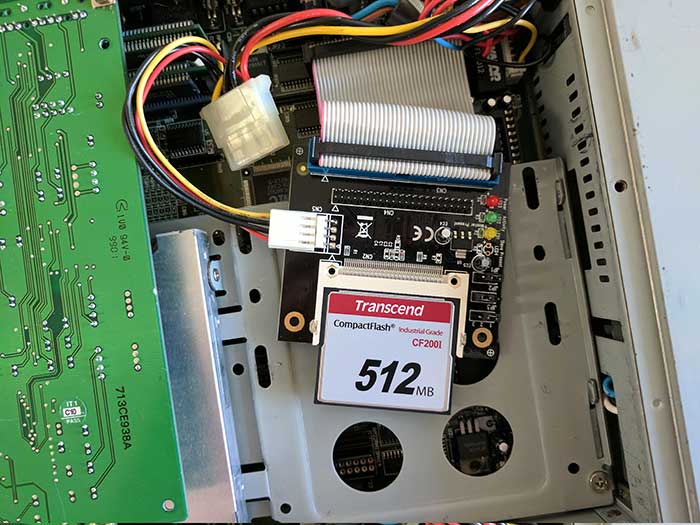 The jumpers I have configured on the CF to IDE adapter set it for 3.3V power and master mode, drawing external power from the adapter you can see plugged in in the photo.

The BIOS configuration that I use for this is 987 cylinders, 16 heads, 63 sectors. If you end up using a CF card to replace a hard disk, make sure you do a FDISK /MBR or you may end up puzzled for a while like I was as to why you are mysteriously unable to boot from it!

You should be able to use a larger CF card if that's all you have (for a short while I was using an 8.4GB IDE hard disk without issue). Though with MS-DOS 6.22 you will only be able to use partitions with a max size of ~500MB.

Mine came with an AMD 486 DX2-66 already and that's what is still installed as I write this. However, these should work fine with up to a DX4 (some even had a DX4 pre-installed). On my CWD-4001 there is a voltage regulator on the motherboard so this should support 5V and 3.3V CPUs just fine, but I've not actually tried this. Do your own research first before trying!

On the underside of the motherboard on my CWD 4001 there is a motherboard diagram showing jumper settings. I've heard some people didn't have this, so I'll share what mine looks like: 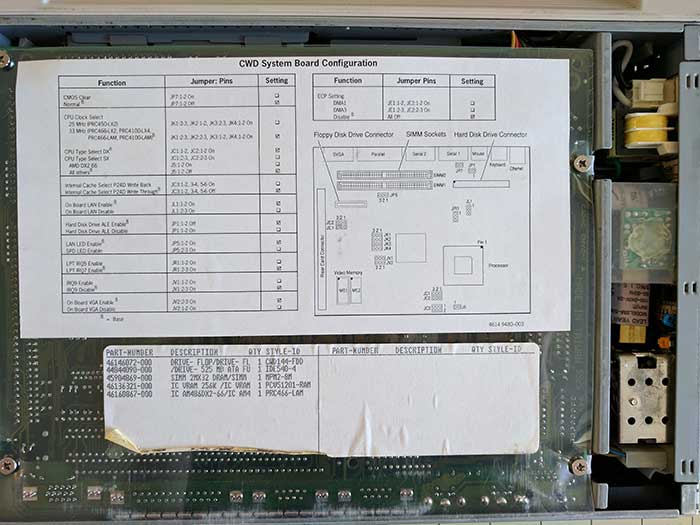 The CWD 4001 doesn't include any L2 cache but since these are 486 machines, I believe all CPUs that these would ever have shipped with had 8KB L1 cache. The BIOS has an option to enable CPU write-back cache so if you have, for example, an Intel 80486 SX955 (P24D) then you can make full use of it. Though you will also have to configure the jumpers as shown in the diagram above. However, probably most people won't have a CPU with write-back cache support. Not to worry if you don't, it doesn't make a massive (real world) performance difference anyway.

For MS-DOS, you'll want the NE2000 packet driver. Then you'll want to add this to your AUTOEXEC.BAT with something like the following:

Where the 10 is the IRQ for the network adapter. Mine was set to 10, yours might not be (IRQ 10 or 11 were very commonly used for network adapters). I didn't have to tinker with any BIOS settings to make this work (not that there really is much of anything that you could change that would affect this to be honest).

As mentioned in my previous post, I'm using a Creative Sound Blaster CT4170 (Vibra 16XV). Your options for sound cards are quite limited with a CWD 4001 due to the compact size of the case. As far as Creative cards go, you'll probably be stuck to only a few of the later models that were more compact. Probably the best choice is one of the AWE64 value cards that is more compact but I don't own this card personally. I'm unfamiliar with what other Sound Blaster clone cards may fit.

For me, using IRQ 5 and 7 both worked. Remember that IRQ 7 is also used for the parallel port (LPT1), so if you're using any parallel port device you may want to configure your sound card to use IRQ 5 instead.

I have the following in my AUTOEXEC.BAT for my CT4170:

The CWD 4001 I would say is pretty average for a 486 DX2-66 system. It does not have VLB graphics, but the Cirrus Logic GD5424 isn't too bad really. The lack of L2 cache is also unfortunate, but the RAM speed seems a bit faster than other 486 systems I've tried... maybe something specific to the chipset/motherboard? Not sure really. The two RAM sticks installed in my CWD 4001 are nothing special, two HYM532220W-70 (72-pin 8MB 70ns) sticks. 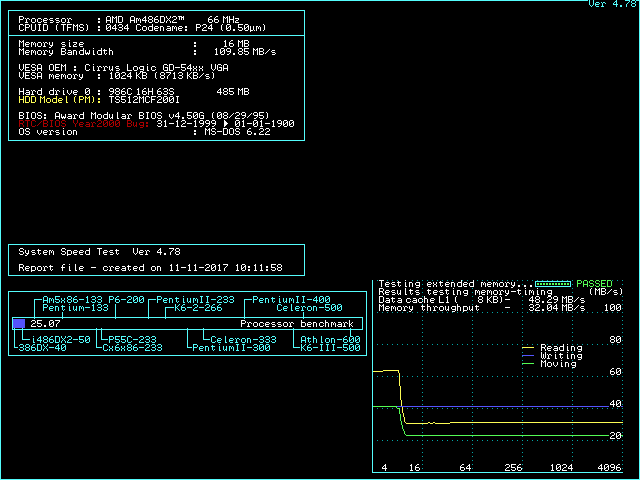 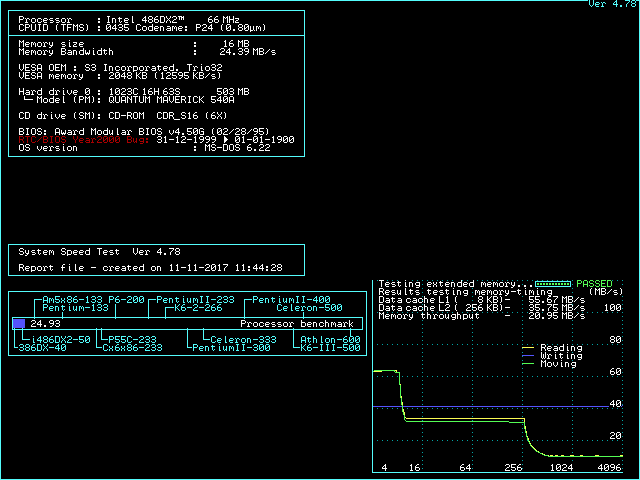 How does this translate to "real world" performance? Well, I can share with you the results from running Phil's DOS Benchmark Pack on both of these systems:

Not really too surprising here when comparing ISA graphics to VLB graphics (in particular the S3 VLB graphics cards tended to be top-tier, performance wise). EDIT: Not sure what I was thinking when I originally wrote this post. The CWD-4001's graphics are VLB-based, not ISA. The differences are likely more a result of the CWD-4001 not having any L2 cache and also differences between the S3 and Cirrus Logic graphics chips.

A few people have asked questions after obtaining their own CWD 4001 (or 4002) after seeing that they were missing some internal components. In particular I've seen some people missing the ISA riser card and/or the bracket that fits onto the inside back of the case which the back plate of an ISA card would slide into when installing one. I'm unsure what people are doing for replacements for these and even if they are easy to come by, but for people's reference I've taken a bunch of photos of the ISA riser card and the ISA back plate bracket thingy.

Anyway, I hope the above helps anyone else looking for information about these Unisys CWD mini 486 computers. Feel free to email me though if you have any additional questions of course (my email address is on the "About" page linked on the left).